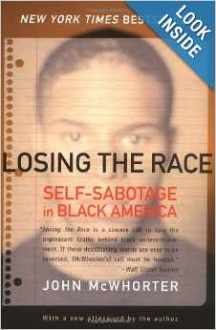 As one of her six children, the greatest gift I received from my dearly departed mother was an appreciation of the value of an education. This appreciation helped me rise from our poor surroundings in inner city Cleveland to become the successful black professional that I am today.

Heeding this lesson, however, was also the genesis of years of verbal abuse, ostracism and criticism I was forced to endure from other black people – from elementary school through graduate school. During these years, I was accused by my black brethren of “acting white” for using correct English, for making good grades and for having a sincere love of learning for learning’s sake.

I could not understand why this happened until I read John McWhorter’s 2000 book Losing the Race: Self-Sabotage in Black America. As the Bible tells us in John 9:25, “Where once I was blind, now I see.”

In Losing the Race, Professor McWhorter outlines in surgical detail three aspects of modern day black American cultural mentality, or “cults,” that hold us back as a people. First is the Cult of Victimology. In it, victimhood is not seen as a problem to be overcome but an identity to be nurtured – even several decades after the Civil Rights Movement. In the Cult of Separatism, the uniqueness of our history is used as a justification to exempt us from the rules that govern the rest of American society. In other words, black criminals, thugs and other societal miscreants are given a pass in the black community; it’s all due to “the legacy of slavery” [wink wink!]  Lastly, in the Cult of Anti-Intellectualism, an affinity toward education is seen as running counter to an “authentic” black identity.  Basically, black students who speak correct English, do well in school, and espouse a sincere love of learning are not seen as “really black.”  They’re seen as “trying to be white.”  (Yet, although this is not explicitly stated, a young black male who sags his pants, whose body is adorned with tattoos, and who drops the F-bomb every other words is seen in certain quarters of Black America as a “real nigga.”  Go figure!)

The anti-intellectualism cult really hit home with me, and McWhorter’s book let me know that the problem was not with me.

All of this reminds me of an experience from graduate school. While enrolled at Carnegie Mellon University, I always actively and enthusiastically engaged in my own learning process: asking questions and engaging professors and other students on various topics.  Granted, I wasn’t necessarily a straight-A student; I just loved learning for learning’s sake. One of my fellow graduate students, a black woman from New York City, felt it necessary to talk to me about my behavior.

She told me of her concern that white students in our program who hadn’t grown up around blacks and who were not used to being around “intelligent, articulate black men” like me (how she would know this is beyond me) would be “intimidated.” She felt they might “try to use that against me in the future.” In other words, white students might discriminate against me because of my love of scholarship! Thus, she advised, I should basically tone down my intellectual zeal.

I never forgot that conversation. After reading Losing the Race two years later, I realized that this woman’s “concern” for my well-being was merely her own anti-intellectual attitude toward me – cloaked à la “Whitey.” In other words, this culturally – and thus, authentically – “down” sister from Brooklyn – ya know, with the pseudo dreadlocks, Afrocentric attire and all-around “hood demeanor,” was dumping her own academic insecurity on me through the specter of supposedly socially ignorant white students who would supposedly retaliate against me for supposedly making them feel mentally inadequate. How lame is that!

Losing the Race opened my eyes to the three cancerous aspects of modern-day black American culture. It also re-ignited and validated the love of learning that my mother instilled in me as a child. That love, as well as a faith in God, enabled this poor boy from Cleveland to become his high school’s first black male valedictorian, his family’s first college graduate, earn a master’s degree in public policy and management, and ultimately become a U.S. Foreign Service Officer.

My life has taught me that education and hard work are the keys to achieving professional success and economic independence. There is no way I would sacrifice that just to gain the myopically fleeting acceptance of my “peers.”  I know who I am, where I come from, and the God that I serve.  I don’t need Chocolate City’s “Ghetto Stamp of Approval.”

This is a race that I plan to win.